Most events locally are cancelled due to Coronavirus / Covid-19.  We will remove this message when government restrictions are lifted, but until then please assume events are not taking place.

In the UK for just three days on a late-announced whistlestop tour, Martín Alvarado is widely considered to be Argentina’s most significant contemporary tango singer and is increasingly acknowledged as one of the finest vocalists in tango’s history. 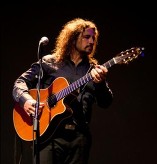 In 2013, he won a Latin UK Award for Concert by International Artist of the Year and had his last album released and distributed worldwide by UK-based label Riverboat Records. His music from four albums has daily airplay on radio stations in Buenos Aires.

Blessed with a fine vocal and emotional range, married to a commanding and charismatic stage presence, he is renowned for sublime live performances with a repertoire that includes rarely heard Piazzolla songs, new tangos, some of his own compositions as well as a few tango and South American classics.

He will be accompanied by internationally acclaimed bandoneon player, Carlos Quilici.

He has performed twice before to full houses so early booking is strongly recommended.

Price: £10 in advance £12 on the door Chjildren and students half price

Why not stay at Deepdale Backpackers & Camping for 'Martin Alvarado - Tango'